April 26, 2015: When I purchased my first Android smartphone in 2009, it was really hard to find good value-for-money phones. Also, since I was still in college, I didn’t have a big budget, so I had to wait for a price-cut to get a decent Android smartphone. While I did get a decent deal, it was the era of Android 1.6 “Donut” and the platform as well as the smartphone market were growing very quickly and my phone became obsolete real soon.

Thankfully, that is no longer the case. It is not only easier to find great value-for-money smartphones these days, but you also not have to worry about them becoming obsolete soon. Android has matured quite a bit in the last few years and so has the Indian smartphone market.

In this report, I will highlight some of the best Android smartphones in the country, which will give your money’s worth.

To make it easier for you to find what you are looking for, this buying guide has been divided into five sections, one for each price-segment.

Although the Android One smartphone Karbonn Sparkle V was launched at INR 6,399 last year, the phone have since received several price-cuts and can now be grabbed for as low as INR 4,500. With the corrected price-tag, the phone is a great value-for-money for anyone looking to get a sub-INR 5K handset.

Just unveiled, the new Canvas Spark is Micromax’s attempt to take on the increased competition in the budget smartphone segment. The Spark runs on Android 5.0 and packs some of the category’s best features.

Although it is a smartphone from a relatively unknown brand, it packs the best specifications that you would get in any phone under INR 5K. Sporting an HD display, the phone is powered by quad-core MediaTek processor. During my review, I found it to be a good performer for the given price-tag.

This is a great one for anyone planning to get an affordable smartphone, which doesn’t suck on the battery front. Powered by a 3000 mAh battery, the Spice 517 runs on Android 4.4 and includes some fairly decent specifications. The phone was introduced in the country with an MRP of INR 7,999, but you can get it for as low as INR 4,999 now. Unlike the Karbonn Sparkle V, which got updated to Android 5.1, the future of software update for 517 is a little murky.

If you are planning to go even below INR 4K price-tag and don’t care for the brand name, Celkon’s Millennia DAZZLE Q44 is the best value-for-money smartphone for you. It has everything that you can want in a basic entry-level smartphone, which can offer decent experience. The phone sports a 4-inch display, runs on Android 4.4 and is powered by quad-core CPU. 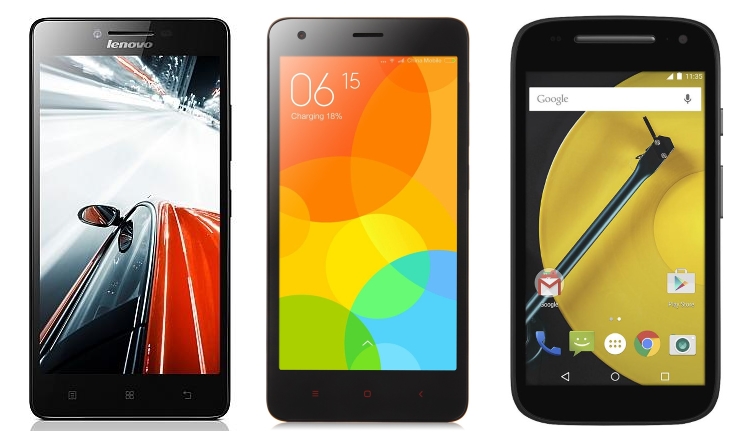 The upgraded version of Lenovo’s much successful A6000 smartphone, A6000 Plus packs all the necessary specifications to offer a great smartphone experience. It comes with 2GB of RAM, 16GB of internal storage and an HD display. The only issue with the phone is the software, which is still based on Android 4.4, even though the phone was unveiled in April 2015, six months after the arrival of Android 5.0.

Xiaomi’s Redmi successor might have disappointed many consumers as it didn’t bring a hefty upgrade in specs, but it is still a great budget smartphone. At INR 6,999, it offers an HD display, Snapdragon 410 quad-core processor and 8MP rear camera.

Yu Televentures, a subsidiary of Micromax Informatics Ltd., was established in 2014 to compete with the increasing threat of Xiaomi and the company did come up with a worthy contender in the form of Yu Yureka. As the company prepares to launch its second smartphone in the form of Yuphoria, the Yureka remains one of the best value-for-money phablets under INR 10K.

Motorola was the first Android manufacturer to bring the real value-for-money smartphones in the country and its Moto G and Moto E smartphones still remain some of the best affordable smartphones. Moto E (2nd Gen) 4G has everything you might want in a budget Android smartphone – an iconic brand, almost stock Android, and decent specifications.

Indian smartphone vendor Lava and its subsidiary XOLO have been coming up with some really nice smartphones off-late. The iris X8 is one of such phones. It includes an HD display, 2GB of RAM and a quad-core CPU. The company has also promised to provide Android 5.0 update for the phone and given Lava’s recent record, we expect to see the update soon.

Looking for a smartphone with a large battey in sub-INR 10K budget, you should take a look at Micromax’s new Canvas Juice 2. It sports a 3000 mAh battery and rest of the specifications aren’t bad either. 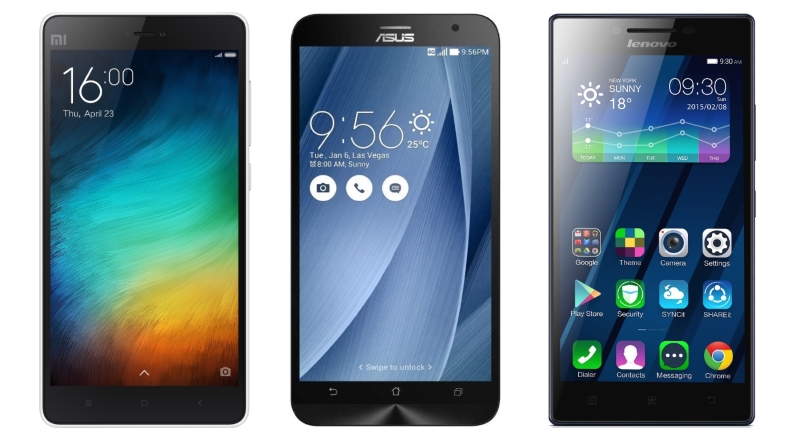 Mi 4i is Xiaomi’s first smartphone that has been developed for the Indian market. Introduced recently at global launch event in Indian capital, the Mi 4i fills the gap between Redmi Note 4G and Mi 4 smartphones. As you can expect from Xiaomi, the phone packs an impressive set of specifications in a really aggressive price-tag.

Asus had surprised many when it announced the original Zenfone smartphone in 2014. The phone went on to be a big success for the company and Asus unveiled a great successor to the phone in the form of Zenfone 2 earlier this year. Now, the smartphone has arrived in India and is available in four variants. In 10K-15K price segment, the company’s ZE551ML (2GB RAM) version is the best bet for you.

Want a smartphone that doesn’t die within hours of heavy usage, you should consider Lenovo’s P70, which comes with mammoth 4000 mAh battery on-board. Despite the huge battery, the phone weighs just 149 grams and is 8.9mm thick.

If 1GB or 2GB of RAM in a smartphone isn’t enough for you, Asus’ Zenfone 2 ZE551ML comes with 4GB of RAM and that too under INR 20K. The 32GB version of the phone will retail at Flipkart and Asus stores at just INR 19,999. The phone also packs a full HD display and a 13MP rear shooter.

The successor to Xiaomi’s Mi 3 smartphone, the Mi 4 includes a fairly impressive set of specifications like 3GB of RAM, 64GB of storage, Snapdragon 801 quad-core processor and 5-inch FHD display. As the phone is now available at multiple retailers and via open sale on Flipart, it has also become easier to get.

Popularly known as ‘the flagship killer,’ the OnePlus One has become slightly old, but thanks to its high-end features and an aggressive price-tag, it still remains the VFM smartphone to beat. OnePlus’ recent decision to remove the need for invites to purchase the phone has made it quite accessible.

With its three-layered design, the Lenovo Vibe X2 is not only great to look at, but it also comes with decent specifications. The phone sports a 5-inch FHD display and is powered by MediaTek’s octa-core processor.

Although Sony Xperia Z3 might be an ageing high-end smartphone, it is still one of the overall decent Android phones in this price-bracket. With recently-announced Xperia Z4 bringing little improvements, Xperia Z3 continues to offer the best value-for-money ratio among the high-end Sony smartphones.

Originally introduced in the country with a price-tag of INR 51,499, Samsung Galaxy S5 has received multiple price-cuts over last one year. The phone can be ordered for less than INR 30,000 these days from various e-retailers and physical stores. Despite the drastic price-correction, the features of the smartphone still remain quite good compared to the competition.

Not satisfied with just full HD screens, you can now get Quad-HD phones for less than INR 35K. LG’s G3, which was among the first Android phones with a Quad-HD (2560x1440p) display, is a complete package. It packs an impressive set of specs in a decent price-tag.

Anything over INR 35,000 isn’t really a value-for-money phone. These are the premium smartphones, which give you bragging rights. If you have the budget for a phone over INR 35K, here are a few Android phones that you should consider going for.