As expected, Google showcased the next version Android at its I/O developer conference on Wednesday. Dubbed as the Android L for the time-being, it will be released to the public (as a part of the devices) later this year but the developer preview and preview factory images for Nexus 5 & 7 devices will be available on June 26.

The key features of the Android L include the new material design, battery life improvements, 64-bit support, ART as the default runtime and the new battery-saver mode.

“This is one of the most comprehensive releases we have done: it has over 5,000 new APIs, and we are thinking not just for mobile, but for form factors beyond mobile,” said Google’s Android and Chrome boss Sundar Pichai.

Starting with material design, which is Google’s attempt to bring a unified design across devices, Google is giving developers tools to create applications that not only express their individual character but are also ready to today’s multi-screen world.

“We’ve been working on a new design language at Google that takes a comprehensive approach to visual, motion, and interaction design across a number of platforms and form factors. Material design is a new aesthetic for designing apps in today’s multi-device world,” wrote Jamal Eason, Product Manager, Android in a blog post.

By including ART as the default runtime over Dalvik, Google claims that it will significant improve the overall performance of Android. 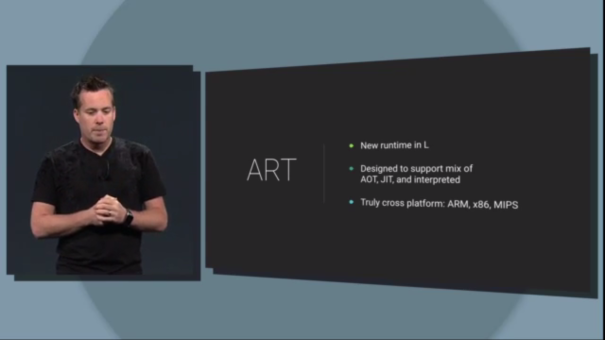 “ART offers ahead-of-time (AOT) compilation, more efficient garbage collection, and improved development and debugging features. In many cases it improves performance of the device with no action required by the developer,” Eason explained.

The company has also released support for 64-bit processor architecture in Android L.

Some interesting and useful changes have been announced on the battery life front. According to Google, it has been working on something called “Project Volta,” which provides necessary tools to help developers in running their apps more efficiently. In addition, a battery-saver mode is being introduced in Android L, which the company hopes, will increase the battery backup of an Android device by 90 minutes over the course of a typical day.

Here is a quick look at the other changes being introduced with Android L:

Advanced camera capabilities: A new camera API is coming in Android L, which will let the developers control parameters such as exposure time, ISO sensitivity, and frame duration, on a per-frame basis.

New features for games: Android L will bring OpenGL ES 3.1 support as well as Android Extension Pack (AEP) as a set of extensions for OpenGL ES 3.1 to include desktop-class graphics in Android games and other nifty features

Simpler lock-security and kill switch: Android L will also bring personal unlocking, using which users will be able to set specific locations such as home, where the phone can automatically relax the lock-screen security. Users will also be able to set the device to be unlocked when connected to a certain Bluetooth accessory.  As reported earlier, Google is implementing factory reset protection in L also known as kill switch to deter the theft of smartphones.

New enterprise features: With Android L, Google has also making the OS ready to enterprise. The company has partnered with Samsung to bring the Knox security enhancements to the core-Android. Android L will also debut Android for Work feature, which will help the users carry on their personal and work lives in the same smartphones. It won’t need any tweaking from the app developers, yet all the personal and work content will fully separate.