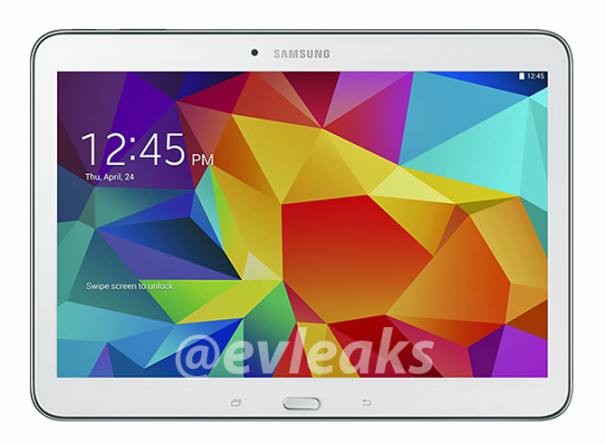 Like we saw in Galaxy Tab 4 7.0, the Tab 4 10.1 renders also reveal that Samsung is keeping its usual design with Tab 4-series too, although there are a few visible differences from the last-generation. The overall design of the tablet is slightly less round and also, Samsung has replaced menu button with multi-tasking button.

To remind you, according to a previous leak, Samsung Galaxy Tab 4 10.1 will come with 10.1-inch 1280x800p display, 1.2GHz quad-core processor, 1.5GB of RAM and Android 4.4. The tablet is also rumoured to pack 8MP rear camera, 2MP front camera, 6800 mAh battery and 1.5GB of RAM. In addition, Samsung will be putting in 16GB of internal storage and a microSD card slot on the device.

There is no word on the pricing or availability right now but if the date mentioned in the press render is any hint, we should see an official announcement on April 24, which is less than a month away.