WhatsApp will soon let you send cash to friends with UPI

WhatsApp Messenger is gearing up to allow the users in India to send money to friends and family. This Facebook-owned chat app is currently testing the peer-to-peer (P2P) payments in the beta version, but the feature is not live for all users.

First spotted by the folks at Gizmo Times, WhatsApp’s payments feature uses UPI framework to send and receive money. The final implementation of WhatsApp payments is unclear at this point, but looking at the screenshots shared by Gizmo Times, the app is including a Payments option among the attachments. Tapping on this Payments option takes you to a new screen to set up your UPI account, given you haven’t already done so. After setting up the UPI account, you will be able to send or receive cash from your WhatsApp contacts. It is important to note here that both sender and receiver need to have UPI setup in their WhatsApp accounts for the payments to work.

The reports of WhatsApp’s plans to integrate payments in its chat app have been circulating for a year now. It is just one of the many tech giants dangling their feet in India’s increasingly lucrative digital payments market. Google is already boasting millions of users on its UPI app called Tez. Truecaller also offers the Truecaller Pay to send or receive money as well as to pay for cellular connections. With over 200 million active users in the country, it is not surprise that WhatsApp wants a pie of the digital payments. I am expecting an official launch sometime this month. 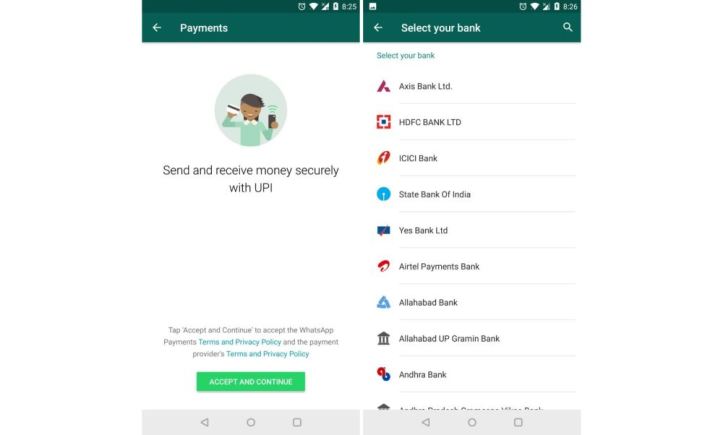 The UPI integration follows the launch of WhatsApp Business in India, which offers the small business owners an easy way to connect with their consumers.

WhatsApp is also working on group calls, support for sticker packs as well as the option to edit sent messages for the users globally.