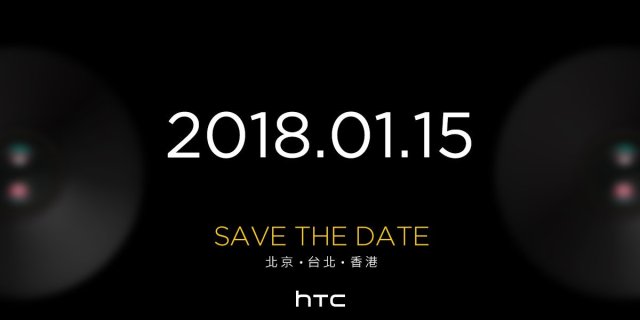 Taiwanese manufacturer HTC is getting ready to unveil a new smartphone called U11 Eyes. As per a teaser posted on the company’s Facebook page, it will be announcing the phone on January 15. HTC is reportedly hosting events in Taipei, Hong Kong and Beijing for the launch.

Although HTC hasn’t shared any details about the phone, known leakster @evleaks has published the official press shots and the full specifications of the phone.

According to evleaks, the HTC U11 Eyes will sport a 6-inch Super LCD3 full HD screen. It will be powered by Qualcomm Snapdragon 652 octa-core processor and pack 4GB of RAM. Other U11 Eye specifications will include 64GB of internal storage, a microSD card slot and 3930 mAh battery.

In terms of the software, the phone will sadly run on the dated Android Nougat operating system. It will also support the company’s Edge Sense feature.

Although @evleaks hasn’t mentioned anything about the imaging capabilities of the phone, it is said to be housing a dual selfie camera (12MP + 12MP). The HTC teaser as well as the name of phone are a clear nod to the dual front camera setup.  The rear camera details are a mystery right now.

Additionally, the HTC U11 Eyes will include USB Type-C port, a fingerprint sensor, 4G LTE support and IP67 water/ dust resistance. It is expected to be priced at 3,299 yuan ($510) and will be offered in Black, Silver and Red colours.

Given these specifications and the pricing, the U11 Eyes is a mid-range smartphone. While the specifications of the phone are mostly decent, the presence of Nougat is a downer.

There is no word on the release outside Taiwan, China and Hong Kong at the moment, but I expect the phone to reach other Asian markets as well as Europe in the coming weeks.