Samsung Galaxy A8 and A8+ hands on video reveals everything

Update (Dec 18): The Cambodian video has been taken down, but you can still check out the captures from video at the end of this report. In addition, the known leaker Roland Quandt is claiming that the A8 (2018) and A8+ (2018) will be offered in Black, Blue, Gold, Orchid Gray colours.

Update (Dec 16): Both Samsung Galaxy A8 (2018) and A8+ (2018) have now appeared in a new hands on video posted by a Cambodian Youtuber. Unlike the video from Bangladesh, its quality is great and it shows both smartphones in all their glory. The video also confirms the previously leaked specifications. You can check out the specs list later in this report.

Earlier (Dec 11): Samsung Galaxy A8+ SM-A730F (2018), which was earlier expected to be called Galaxy A7 (2018), has appeared as a part of a hands on video on YouTube (video has been taken down). This video not only shows the phone in detail, but also reveals the full specifications.

The video quality is not amazing, but it is clear enough to give us a decent idea of what to expect from the smartphone. It is embedded at the end of the report.

As rumoured, the phone will be sporting a 6-inch Super AMOLED Infinity display with slim bezels and 2220x1080p resolution. It will be sport a metal build and pack a dual camera setup on the front with 16MP and 8MP sensors. On the rear, there will a 16MP single camera.

In terms of the processor, the phone is powered by 2.2GHz Samsung Exynos 7885 octa-core processor. There is also 6GB of RAM, 64GB of internal memory, microSD card slot and 3500 mAh battery in the phone. On the software front, the smartphone runs on Android 7.1.1 Nougat. 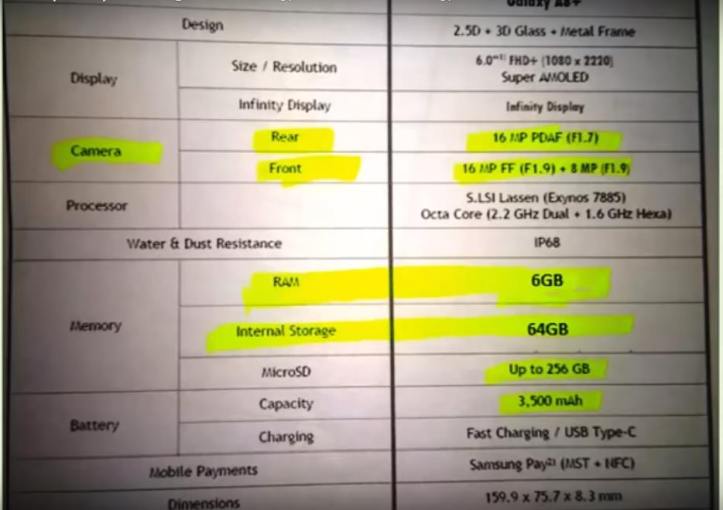 Among other features, the A8+ (2018) will be IP68 dust and water-resistant and packs NFC support, USB Type-C port, a fingerprint sensor and fast charging.

In related news, the manual of the Galaxy A8+ (2018) has been spotted on the Samsung website, which confirms many of the above details. Also, since the same manual is meant for Galaxy A8 (2018) (SM-A530F) smartphone as well, we can expect to see the same design, Infinity display, dual front cameras, Android Nougat, NFC, and fingerprint sensor in the A8 (2018). You can find the complete manual at this link.

The pricing and exact availability details of both phones are still unclear, but the publishing of the official manual on the company site and the retail unit leak in the hands on video indicate that we are likely to see an announcement very soon.

A few screens from the video in case it gets taken down: 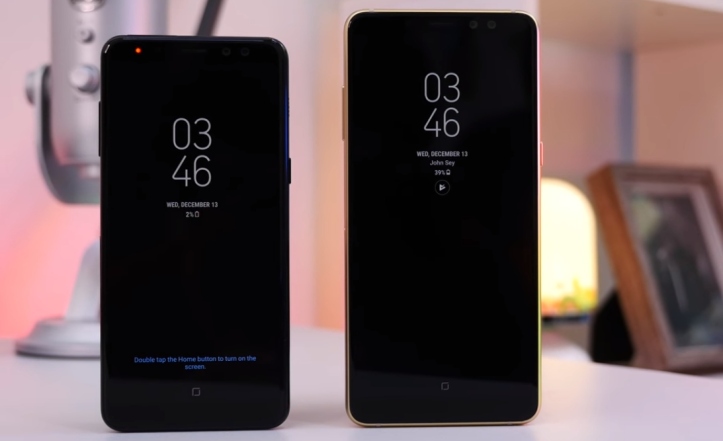 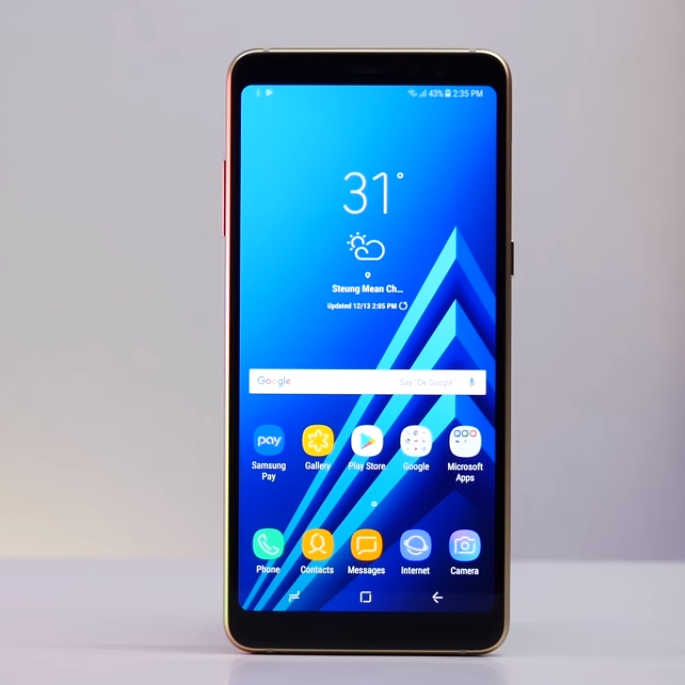