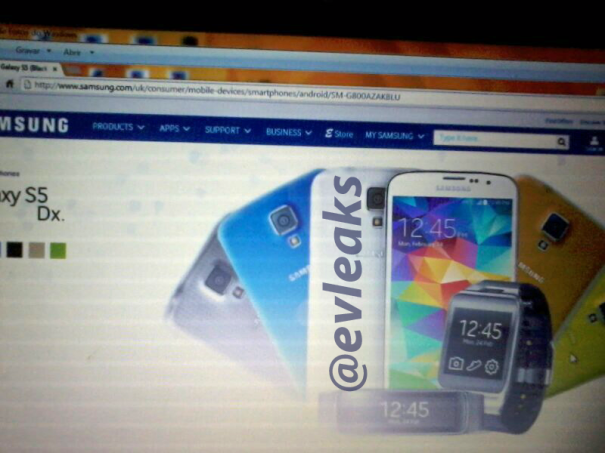 If a leaked screenshot of Samsung UK website is to be believed, the Korean manufacturer is planning to dub the rumoured Galaxy S5 Mini smartphone as Galaxy S5 Dx. While the reason behind this branding in unclear, it doesn’t look surprising as the company had recently named the successor of Galaxy S4 Zoom as Galaxy K Zoom instead of Galaxy S5 Zoom.

The screenshot also reveals that the phone will be released in multiple colour options like White, Black, Blue, Gold and Yellow with Galaxy S5 perforated back design.

It is important to point out here that there are various discrepancies in the screenshot like the name of the smartphone in page title on the browser tab and the placement of LED flash is off-centre in the gold version of the phone. So, take this leak with a pinch of salt.

As per previous rumours, the Galaxy S5 Mini or S5 Dx will come with a 4.5-inch 720p HD display, Qualcomm Snapdragon processor, 1.5GB of RAM and Android 4.4. The phone will also include 8MP rear camera, 2MP front camera, and 2100 mAh battery.

There is still no word on the release date or pricing.