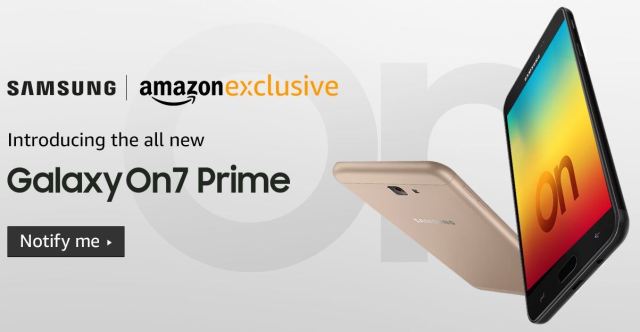 Remember that upcoming Samsung On-series phone that Amazon India started teasing in late-December. Well, Amazon has updated its teaser with some details about the smartphone and its key specifications.  It is going to be called Samsung Galaxy On7 Prime and come with the specifications very similar to what the company’s Galaxy J7 Pro offers. Also, the Indian version of the On7 Prime is different from what Samsung is selling in UAE.

As per the Amazon listing, the Samsung Galaxy On7 Prime will sport a 5.5-inch FHD screen in a full metal unibody design. The phone will be powered by the company’s octa-core Exynos 7870 processor. There are going to be two versions of the On7 Prime – one will come with 3GB RAM and 32GB of internal storage and the other will pack 4GB of RAM and 64GB of internal storage. A microSD card slot will also be present in both versions with support upto 256GB of storage.

In terms of the camera chops, the Galaxy On7 Prime includes 13MP f1.9 rear shooter with LED flash and a 13MP front shooter. There is no official word on the Android version, but I believe it is going to be Android Nougat.

Amazon has not said anything on the pricing or exact availability, but a recent report from IANS suggest that the On7 Prime launch will happen sometime this week with a price-tag around INR 15,000.