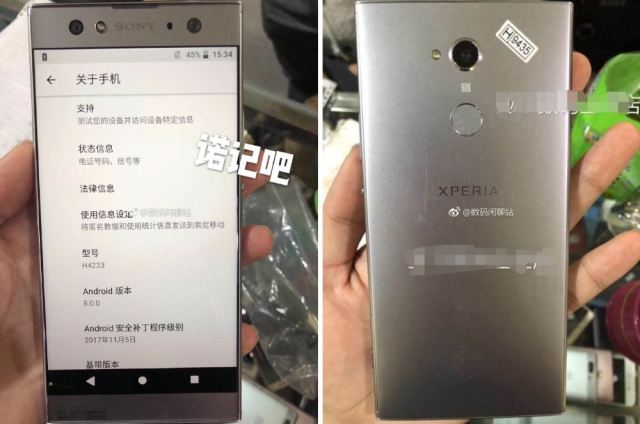 Earlier (Jan 1): The first images of the Sony Xperia XA2 Ultra smartphone have made their way online. Shared by a Weibo user earlier today, the images reveal the presence of a dual selfie camera, which was unknown until now.

Sony Xperia XA2 Ultra was first spotted online in the database of GFXBench as Sony H4233 in September last year. The recent listing from Malaysian regulator confirmed that H4233 is actually Xperia XA2 Ultra. Now with the latest leak, we finally have an idea of how the phone is going to look like.

If the leaked images are indeed accurate, Sony hasn’t changed much from the Xperia XA Ultra’s front panel design, but the rear of the phone are quite a few tweaks. The back camera placement has been changed and it has been joined by a fingerprint sensor now.

No other new details are available at this point, but we already know quite a lot about the phone. To remind you, the Sony Xperia XA2 Ultra will feature a 6-inch full HD screen. It will run Android 8.0 Oreo and will be powered by 2.2GHz octa-core Qualcomm Snapdragon 630 processor. Other Xperia XA2 Ultra specifications are expected to include 4GB of RAM, 32/ 64GB of internal storage, and NFC support. The dual selfie camera resolution are unconfirmed at this point, but at least one of the front sensors is expected to be 16-megapixel. On the rear, we will get a 21-megapixel primary camera with LED flash, capable of shooting 4K videos. The usual connectivity options like 4G LTE support, Wifi, and Bluetooth will also be present.

The pricing and exact release date are unknown at this point, but there is a likelihood that we will see the official announcement of XA2 Ultra at the upcoming CES trade fair along with a couple more Sony phones.