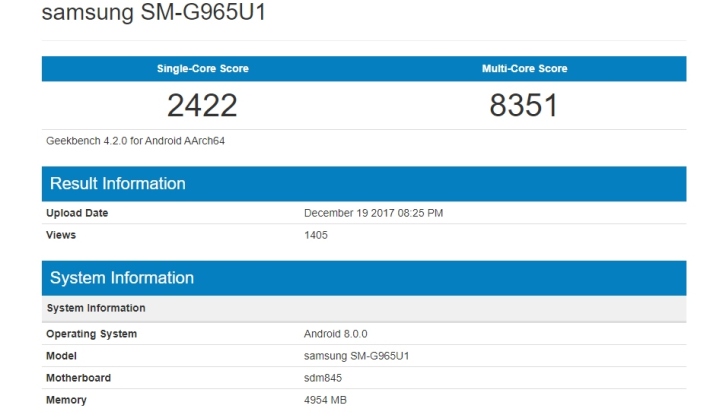 Earlier: Samsung Galaxy S9’s bigger cousin Galaxy S9+ has been sighted in the database of Geekbench. Expectedly, the listing reveals that the phone is powered by Qualcomm Snapdragon 845 octa-core processor. Samsung typically releases two processor variants of its Galaxy S and Note-series phones, one with the latest flagship Qualcomm Snapdragon processor (845 in this case) and the other with its own flagship Exynos processor.

Among other specifications, the S9+ (SM-G965U1) seems to include 6GB of RAM and Android 8.0 Oreo operating system. Geekbench listing doesn’t include any other specifics, but the benchmark scores show that Snapdragon 845 is going to be a really powerful processor and it tops everything from the existing crop of Android devices. However, the performance doesn’t match up with Apple A11 Bionic, whose Geekbench scores are over 50% more than those of the Snapdragon 845.

Previous rumours and leaks have suggested that the Galaxy S9+ will sport a 6.2-inch curved-edge Super AMOLED Infinity display and pack dual rear camera and a fingerprint sensor.

Samsung Galaxy S9+ as well as S9 are likely to be announced at the Mobile World Congress in February next year with an expected availability in March. Both phones are going to be incremental upgrades over the S8 and S8+.

In related news, Samsung has already started announcing its 2018 line-up of the smartphones. The company on Tuesday unveiled the new Galaxy A8 (2018) and Galaxy A8+ (2018) phones, which are going to be a part of the mid-range segment. The A8 phones feature 18.5:9 Infinity displays, dual front camera and Android 7.1 Nougat. Both smartphones will be available beginning early-January 2018 in the markets around the world. On the pricing front, they will retail start 499 euros. There is no word on the India pricing at this moment.