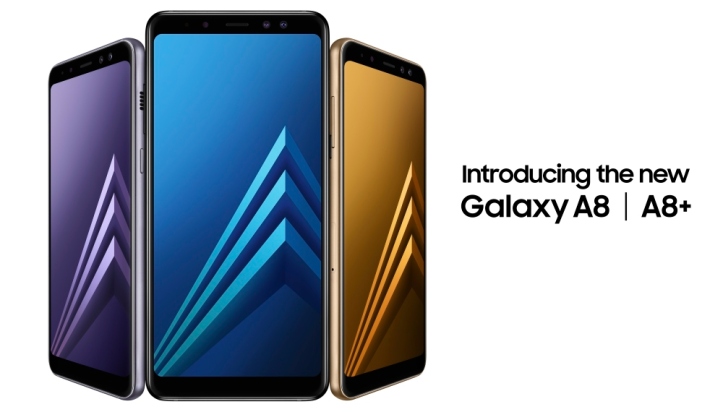 Galaxy A8 and A8+ are the first of the company’s 2018 A-series line-up, which would be getting at least a couple more phones over the coming months. The new smartphones are quite different from the last generation and pack a number of visual and under-the-hood improvements.

As you can see in the image above, the Samsung Galaxy A8 (2018) and Galaxy A8+ (2018) sport Infinity displays. The A8 has a 5.6-inch Super AMOLED screen and A8+ will come with 6-inch Super AMOLED screen. Both smartphones are powered by the same 2.2GHz octa-core Samsung Exynos 7885 processor. For the photography needs, Samsung has packed dual front camera on the phones with 16MP and 8MP sensors. There is a rear camera as well with 16MP sensor with LED flash.

Other common specifications between the A8 and A8+ are USB Type-C port, fast charging support, NFC, IP68 water/ dust resistance, and fingerprint sensor. The phones run on Android 7.1.1 Nougat and will most likely be getting the Android Oreo update sometime in 2018.

“With the release of the Galaxy A8(2018) and A8+(2018), we’re bringing our customers’ favorite features from our flagship smartphones, such as the Infinity Display and our first Dual Front Camera with Live Focus, to our Galaxy A series, which is already known for its premium design”, said Junho Park, Vice President of Global Product Planning, Mobile Communications Business at Samsung Electronics.