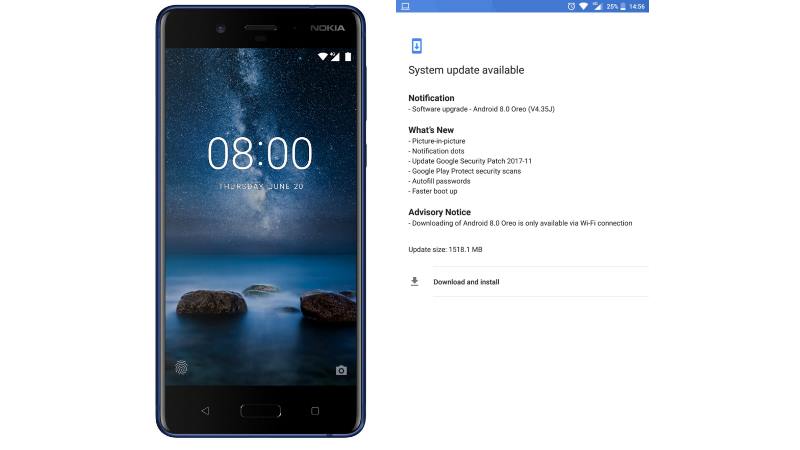 HMD Global on Friday announced that it has started the Android 8.0 Oreo update roll-out for the Nokia 8 smartphone. The update will be available over-the-air (OTA) and reach all Nokia 8 units automatically over the next few days.

You can also manually look for the update by going to Settings > About phone > System updates > Check for update.

The Oreo update is over 1518 MB in size and requires a working Wifi connection. As per the official change-log shared by the company, the update carries the version number v4.35J and includes all the Android 8.0 goodies including features like notification dots, picture-in-picture support, and autofill for passwords. The software update also brings the November Android security patches to the Nokia 8.

If you have already installed the Oreo update on your Nokia 8, do let us know about the experience in the comments section.

This is the first Nokia-branded Android phone from HMD Global to get the Android Oreo update. The company began testing the public beta of Oreo for Nokia 8 in late-October and it was finished on November 11. HMD Global has promised to provide the Oreo update for all its smartphones.

Nokia 8 is the current flagship model for HMD Global. It was unveiled back in August and started selling in September. It originally ran on Android Nougat and since received the regular monthly security software updates.

It was launched in the Indian market in late-September for INR 36,999. The phone sports a 5.3-inch 2560x1440p QHD IPS display. It is powered by Qualcomm Snapdragon 835 octa-core processor and comes with four-gigabytes of RAM, 64-gigabytes of internal storage and microSD card slot.