Samsung Galaxy A7 (2017) gets November update in India 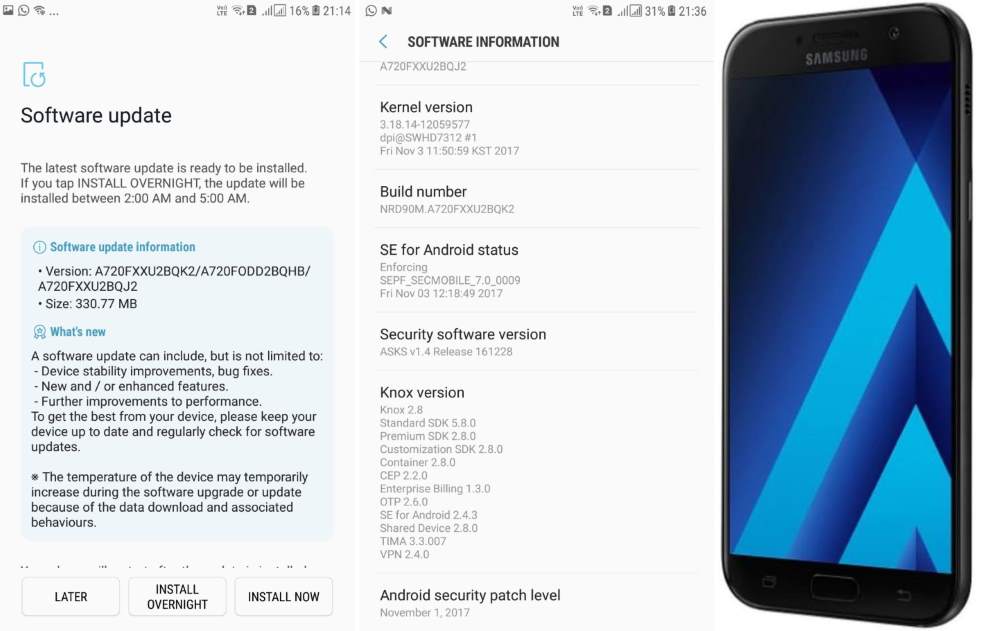 Less than a week after Samsung started rolling out the November update for the Galaxy A7 (2017) smartphone in its home market of South Korea, the company has released the same update in India.

The company on Saturday started the roll-out in the country and the update is expected to reach all A7 (2017) units over the next few days. According to SamMobile, the software update is just over 330MB in size. It brings Android’s November security patches as well as bug-fixes and device stability improvements. Additionally, you will also get new and enhanced features, which Samsung hasn’t detailed in the changelog, and performance enhancements. To remind you, Android’s November security patches include a fix for Wi-Fi KRACK vulnerability, 61 Android vulnerabilities as well as six Samsung-specific vulnerabilities.

You will automatically receive a notification when your Galaxy A7 (2017) unit is ready for the new update, but if you don’t want to wait, you can manually look for it by going to Settings > Software update.

Samsung Galaxy A7 (2017) is the second Samsung A-series phone to get the November update. The company has also released the same update for Galaxy A5 (2017) smartphone. It isn’t clear at this point if the A5 update has reached Indian shores or not.

Apart from A7 (2017) and A5 (2017) phones, Samsung has also rolled-out the November update for Galaxy S7, S7 edge, Galaxy Note 5, Note 8, Galaxy S6, S6 edge, and J1 (2016) smartphones in select markets. The November update for these phones will be reaching to other markets including India over the coming weeks.

To remind you, Samsung Galaxy A7 (2017) was launched in the Indian market in March this year with Android 6.0.1 Marshmallow out-of-the-box. In September, Samsung updated the phone to Android 7.0 Nougat. It is currently sold for INR 20,990 in the country.