Google earlier today released the November software update for the Pixel 2 and Pixel 2 smartphones. As promised after the whole brouhaha about the display issues on the new Pixel 2 phones, this update includes the fixes like the addition of new colors mode.

According to a statement posted by Google’s Orrin in Pixel User Community, the November software update for Pixel 2 smartphones is rolling out now and will reach all units over the coming week. In addition to the color modes (Saturated, Natural and Boosted, more on these modes later in the post), the update brings a fix for the faint clicking noise heard in some Pixel 2 phones. Furthermore, there are some UI tweaks, which will help in increasing the lifespan of the OLED displays used in the two phones, especially Pixel 2 XL, which has faced most of the criticism after the screen burn-in and image retention reports.

Like other monthly updates, there are security patches bundled in the software update as well as non-display related bug-fixes.

Google has promised to provide more display-related fixes in the December update and other future updates. 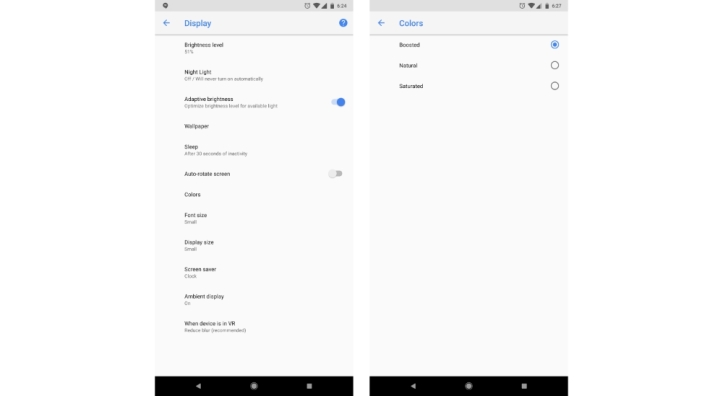 Coming to the details of the new color modes debuting with the latest software update, Google has replaced the ‘vivid colors’ toggle with an option to select from Boosted, Natural and Saturated color modes. Boosted will offer similar results to those achieved when ‘vivid colors’ toggle was on, Natural is the normal Pixel 2/ Pixel 2 XL display, and Saturated will provide punchier colors with more saturation. Even with the Saturated color mode, don’t expect your Pixel 2 smartphone to turn into Galaxy Note 8 or Apple iPhone X, Google is still keeping things conservative and on the natural side.

In related news, the updated factory images as well as OTA files with November update are now available on Google’s developer website for the Pixel 2 phones.