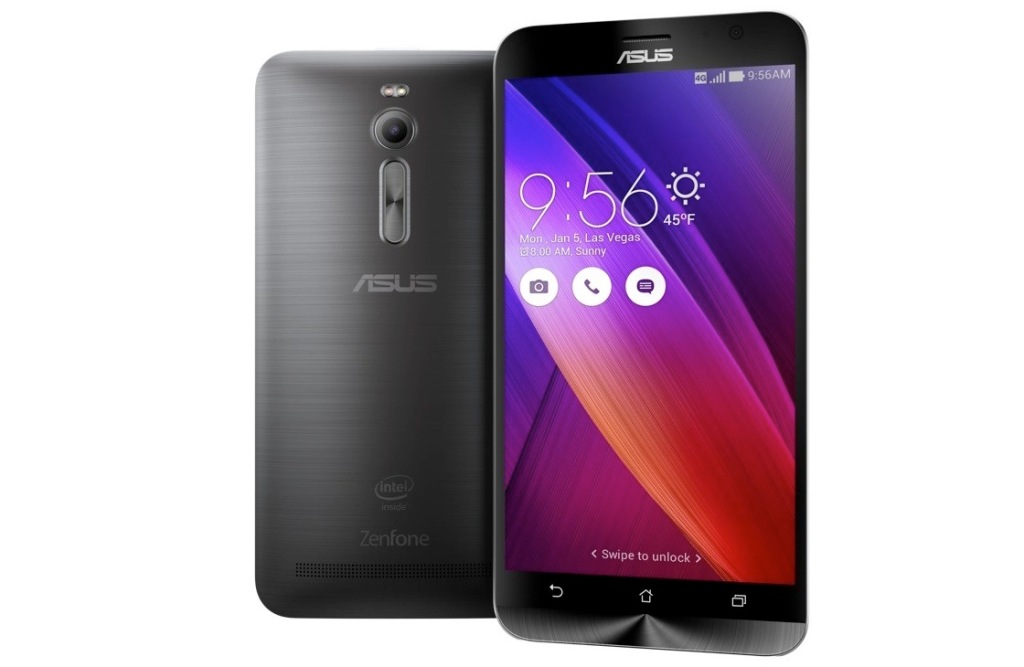 Before the debut of the original Zenfone in 2014, the smartphones were never considered to be the forte of Asus. The company did produce some Windows Mobile devices in the so-called early days of the smartphones, but it never really became a credible competitor in this space.

All this changed when Asus Chairman Jonney Shih unveiled the Zenfone 4, 5 and 6 at the Consumer Electronics Show 2014 in Las Vegas. The original Zenfone line-up ticked all the right boxes and suddenly, there was a great new player in the arena.

Now, the company is back with the second-generation of its Zenfone line-up and while things look optimistic on paper, it remains to be seen, whether Asus has been able to outdo the predecessor with Zenfone 2.

Asus has launched multiple variants of the Zenfone 2 smartphone and it is quite confusing. To keep things simple, let me make it clear from the beginning that Zenfone 2 in this review refers to the Asus Zenfone 2 variant with 1080p display, 2.3GHz Intel Z3580 quad-core CPU, and 4GB of RAM.

The first time you lay your eyes on the Zenfone 2, it reminds you of the original Zenfone. The front of the smartphone is pretty much the same as its predecessor apart from concentric-circle pattern below the Android navigation keys, which is now less pronounced and not really noticeable unless you are specifically looking for it. The design status-quo is not always a good thing and same is happening with the Zenfone 2. While you could forgive the wide-bezels in the original Zenfone line-up because there were four display sizes and you could go for more compact phone if you wanted, but the situation is quite different with Zenfone 2. There is just one display size – 5.5-inch (the 5-inch model is more like a refreshed Zenfone 5), which with the big-bezels, makes the phone quite huge. 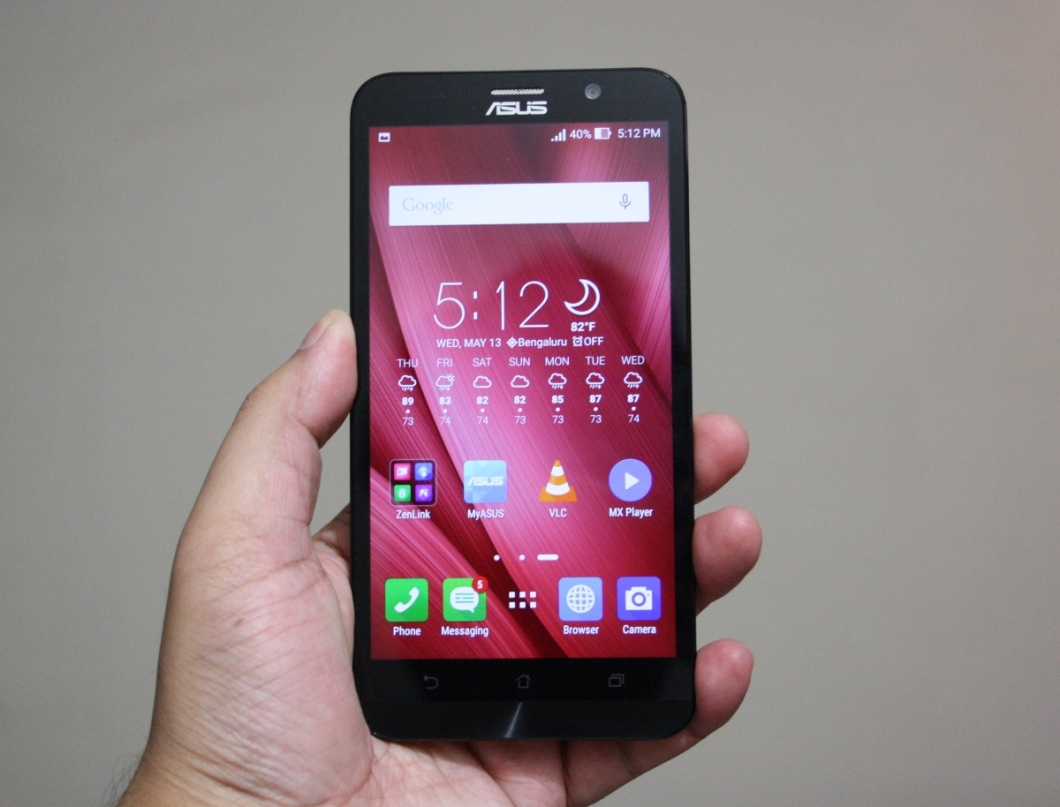 The giant phone might work for users, who explicitly prefer phablets, but it is a nightmare for the consumers wanting a regular-sized smartphone. The one-handed usage is virtually impossible with the Zenfone 2 for the users like me with normal-sizes hands, unless you use the one-hand mode software feature on the phone, which reduces the display size and makes it reachable for your thumb (more on it in the software section).

The company has tried to help with the handling issues by adding a curved back to the phone, but it doesn’t help that much, partly because of the fact that instead of a mild curve on the rear, Asus has gone with a significantly curved design with 10.9mm thickness at the centre and 3.9mm at the edges. The rear of the phone also houses the volume rocker, like the LG’s recent G-series phones, which takes some getting used to. The placement of the power button on top is an odd decision by the Zenfone 2 design team because it is really hard to reach given the mammoth size of the phone, but thankfully, the phone support double-tap to wake, so you won’t have to look for the power button that many times. The back cover is removable and sports a brushed metal finish. 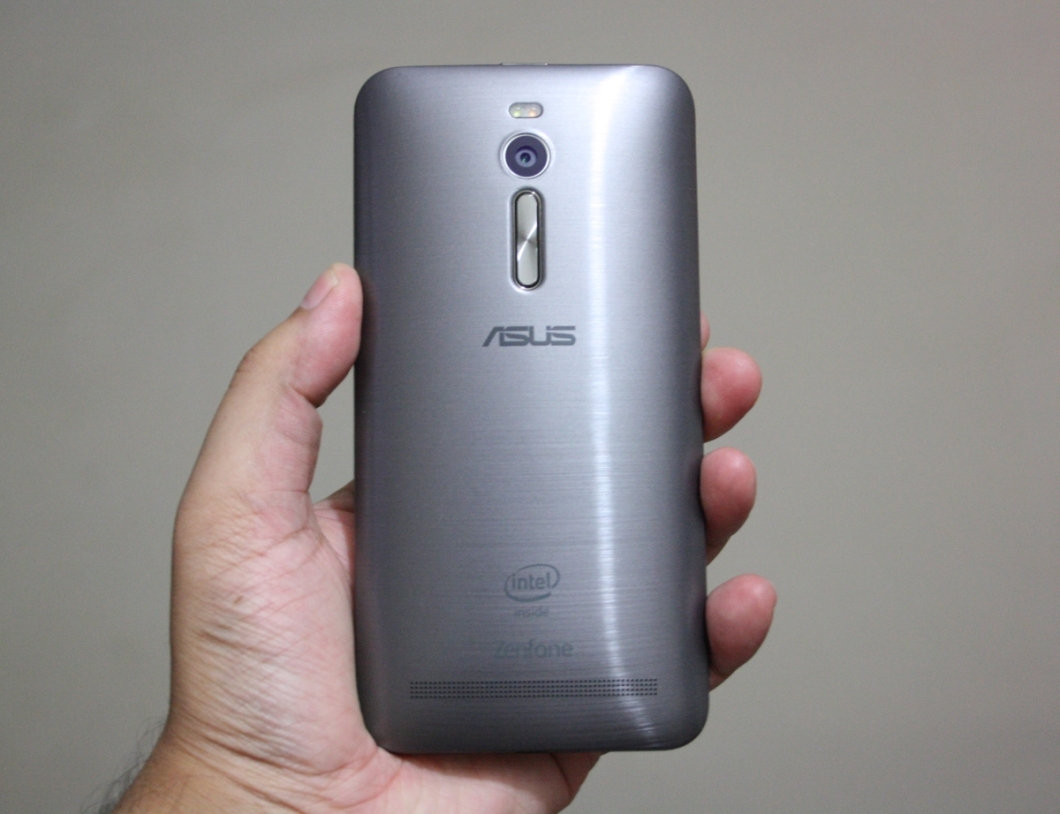 The overall build quality of the phone is great, like most Asus products and the Zenfone 2 feels solid in hand.

The display on the Zenfone 2 includes 1920x1080p full HD resolution, which offers decent viewing angles and excellent colour output. However, the brightness of the screen could have been more. Among three phones, which are lying around with me at the time of the testing, Nexus 5, Zenfone 2 and Xiaomi Mi 4i, Zenfone 2 screen was the least bright.

Asus Zenfone 2 might have some issues on account of being hefty, but the inclusion of Intel’s 64-bit Atom Z3580 quad-core processor and 4GB of RAM in the phone leaves little to be desired on the performance front.

The phone is snappy and I didn’t notice any lag or jitters during the time I was testing the phone. Whether you are playing a graphic-intensive game or watching full HD videos or just browsing the web, the smartphone handles everything with ease.

There are also no issues with the basic stuff like calling, texting, Wi-Fi connectivity or Bluetooth support. The on-board speaker is okay-ish and despite its presence on the back, the sound doesn’t get muffled and we have to thank the curved back for that.

The smartphone heating issues are quite a bit in the news these days and the normal consumers often get worried when they see their smartphone getting warm. I should let you know right here that some amount of heating is quite normal on the smartphones. Given the amount of processing taking place on these small devices, it is normal for them to get warm. Like most smartphones these days, Asus Zenfone 2 also gets warm when you are playing games or watching full HD videos for a long time, but not the amount, which will make you uncomfortable.

On the software front, Asus has loaded Android 5.0 in the smartphone with its Zen UI, which, unlike most manufacturer customisations, is quite decent (although not very pretty) and doesn’t attempt to kill the essence of Android. In spite of the tweaked icons and UI changes, the Android 5.0 features are clearly visible and they work as expected. Also, Asus has made sure that pretty much all components of the Zen UI are available in Google Play as apps for easy updation.  Unfortunately, not everything is honky-dory as the Zenfone 2 packs plenty of bloatware, which was absent from its predecessor. Although some of the bloatware can be removed, but most of it will continue to take space on your phone.

As I have written in the design section, the phone packs a “One-hand mode,” which is supposed to help the consumers with the single-hand use. It can be triggered by double-tapping the home-button or via the quick settings menu. One-hand mode reduces the size of the display area, thus making everything small and bringing it within the reach of your thumb. The overall size of the reduced display can also be changed as per your choice and moved around the four corners of the screen. There are plenty more such useful enhancements in the smartphone.

One of the significant portions of the Zenfone 2 unveiling at the CES 2015 was devoted the camera prowess of the smartphone and rightly so. The 13MP shooter present on the rear of the phone is quite good. It captures nice images with ample amount of details and sharpness. The camera also uses the company’s PixelMaster tech to capture better low-light images. The front camera is also decent and combined with beautification mode, you will able to capture some nice selfies.

The Asus camera application offers plenty of options to tweak around including a manual mode.

Moving to the battery-life, which is the biggest issue with the phone. It is not terrible, but it is not great either. Asus has packed a 3000 mAh battery in the smartphone, which will last a work day with moderate use, but heavy users will need to carry a power bank for uninterrupted performance. During our video test, the phone lasted less than 4 hours with full brightness and constant Wi-Fi connectivity.

With impressive performance, decent display and a great camera, Asus Zenfone 2 is clearly doing most of the stuff right, but unfortunately, the average battery remains a big let-down in an otherwise exceptional smartphone. There are also some minor issues like it being a giant phone (not everyone’s cup of tea) and bloatware, but these will not be a deal-breaker for most.

Overall, Asus has really come-up with a great successor to the original Zenfone-series. At INR 19,999 (32GB model), there are a few competitors to the phone like the Xiaomi Mi 4 and OnePlus One, but none of these phones outclass the Zenfone 2. It is also futureproof unlike its competitors, which will have successors in a matter of months.

So, if you are looking for a smartphone under INR 20K right now and don’t have an issue with relatively large smartphones and so-so battery-life, Zenfone 2 is the right choice for you. You can also go for increased on-board storage by paying more, but for most 32GB storage will be enough. 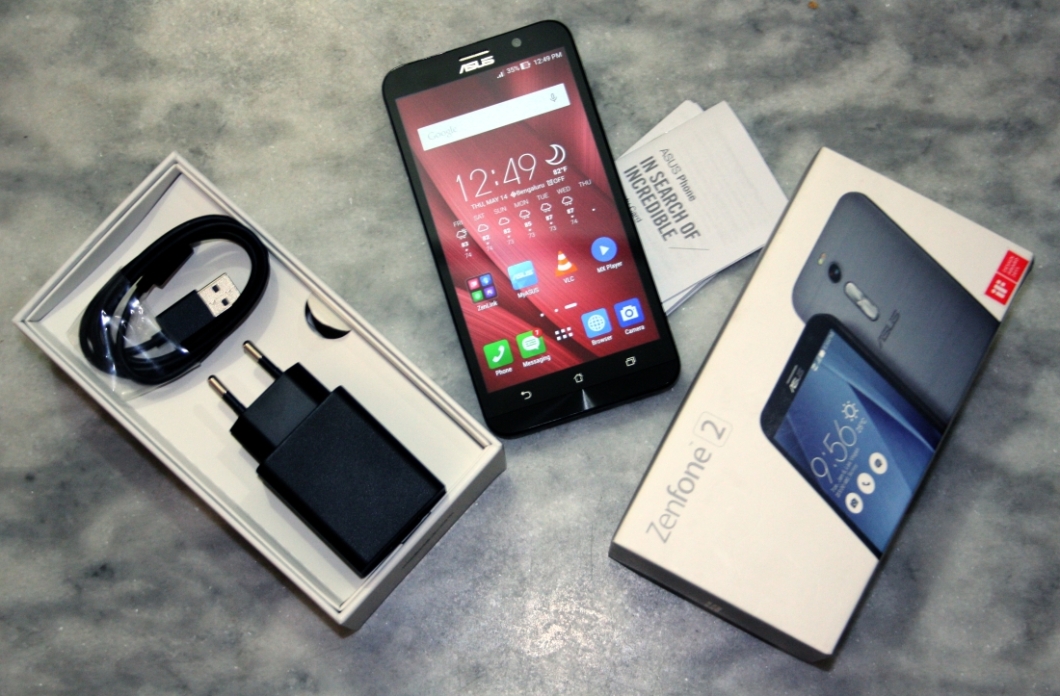