Samsung is getting ready to launch a new smartwatch. The company earlier today announced the release of the software development kit (SDK) for the next-gen Gear smartwatch. Although the company hasn’t shared any specifics about the device, the graphic accompanying the Samsung announcement indicated that the smartwatch will be round.

The company is calling developers for get their apps ready for the new form factor. The launch of its own SDK for the smartwatch also confirms that the upcoming Gear smartwatch will run on Tizen and not Android Wear. Samsung has only released one Android Wear smartwatch till date – Gear Live. Samsung Galaxy Gear, the first smartwatch from Samsung, was initially based on Android, but the company later pushed a Tizen OS update for it.

When launched, the upcoming Samsung smartwatch will be the seventh Gear-branded wearable from the company.

Rumours indicate that the new Samsung smartwatch will include a crown-shaped power button and a rotating bezel ring on the top. The power button will be used for waking up the display, S-Voice launch or sending an emergency message, however the functions of the bezel ring are a mystery at this point.

It is expected to be dubbed as Gear A and will be available in two versions – one with normal Bluetooth connectivity for pairing with smartphones and other with built-in 3G and Wi-Fi support for standalone use and calling support. 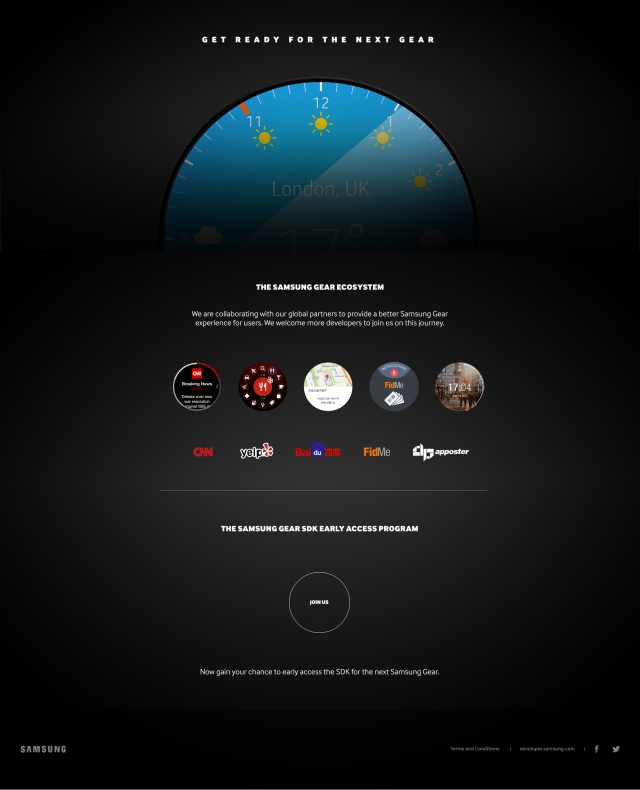