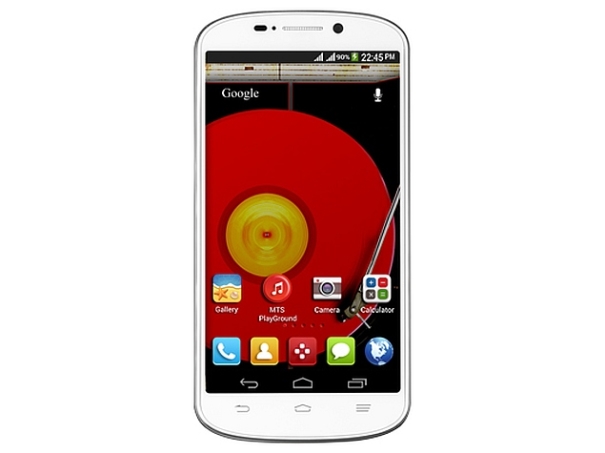 Telecom operator MTS has announced the launch of its new Blaze 5.0 Android smartphone in the Indian market. Featuring dual-SIM support, the phone has been priced at INR 10,999 and can be grabbed in Delhi, Rajasthan, Gujarat, Karnataka, Kerala, Tamil Nadu, UP West, West Bengal and Kolkata circles.

According to MTS, the Blaze 5.0 runs on Android 4.1 (which is outdated in the era of KitKat) and comes with quad-core Qualcomm Snapdragon processor, 5-inch display of unknown resolution and 2500 mAh battery. The phone also packs 8MP rear camera, VGA front camera and microSD card slot. Other specifications are unclear at this point.

MTS has also preloaded applications like MTS Playground music, MTS TV and MTS Wizard on the phone, which provide useful functionality.  The telecom operator is also bundling 100,000MB of free data usage valid for 1 year with Blaze 5.0, which can be activated with a recharge of INR 198.

“Smartphones today are one of the biggest drivers of data consumption in the country. Given this reality, MTS India is focused on introducing products and services that are built for a fantastic data experience. Blaze 5.0 has been powered by the best in class Qualcomm S4 quad core processor and has been exclusively designed to cater to the Internet Generation”, said Leonid Musatov, Chief Marketing & Sales Officer – MTS India.