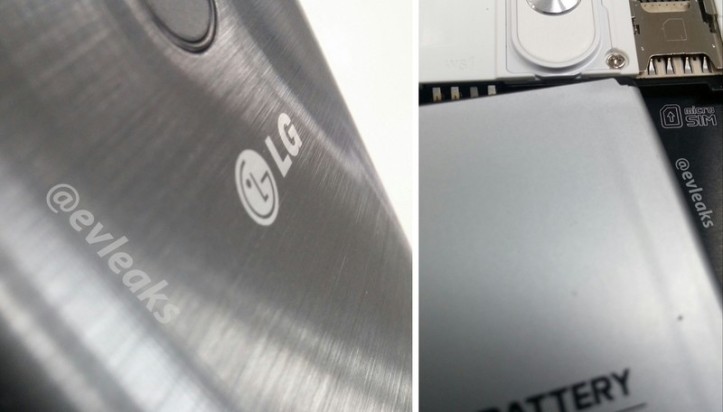 HTC One (M8) might have been the most leaked phone of this year but LG G3 is getting closer with new leaks every day. Thanks to the latest two leaks, some new details about the phone have appeared online.

Talking first about a report from Greek website Techmaniacs.gr, which is stating that it has learnt from sources that LG G3 will come with Qualcomm Snapdragon 805 processor, 3GB of RAM, 13MP rear camera with OIS+, 32GB of internal storage, microSD card slot and 3200 mAh battery.

While some of these specifications have been floating around the web for some time, there was no information on which processor is being used by LG in G3. While Qualcomm Snapdragon 805 looks like a great option, we can’t be certain until the official announcement. If true, LG G3 will be the first phone to come with this SoC.

Coming to the second leak, which has been shared by @evleaks, LG is reportedly using some sort of metal finish on G3 (see top image). As last few leaks have shown plastic back on the phone, it is probably faux-metal. @evleak has also shared a photo of the phone, which suggests that G3 might come with a removable battery. This should make a lot of consumers happy as many users want to put in larger mAh batteries in their phones to get better battery backup, however it is often not possible as manufacturers have increasingly started using embedded batteries in smartphones.

With May 27 just twenty days away, we won’t have to wait for long to get the final confirmation on everything LG G3. As always, we will be bringing you all the details, so stay tuned.