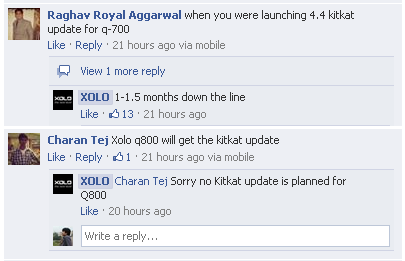 Update: Turns out the information provided by XOLO team on its Facebook page is incorrect and Q700 will not be getting KItKat update. We were just contacted by XOLO PR team, which has confirmed that no update will be arriving for Q700.

Earlier: The company made this statement during its Tech Tuesday discussion on Facebook.

XOLO has not shared any other details about the update but we should be hearing more from the company in the coming days. The company has also stated that XOLO Q800 or A700 won’t be getting KitKat update.

As we are on the topic of updates, XOLO has also revealed details regarding some of the upcoming updates for several of its devices.

Back to Q700, the smartphone was originally introduced in May 2013 with Android 4.2 on-board and has already got the Android 4.2.1 update. With the update to Android 4.4, it will probably be the first smartphone from XOLO to get so much software love.