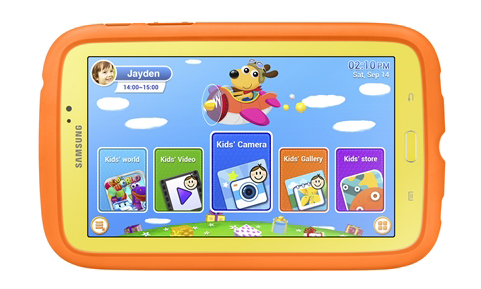 Samsung has announced a new Android tablet in its portfolio but unlike other tablets it will exclusively be targeted to children. As we all have seen around us, whether we want or not children are using technology more than ever and so children-specific products do make sense.

“We saw an opportunity to create a device just for kids that provides them with an intuitive, fun and kid-friendly user experience filled with rich, interactive and educational content that parents will love,” said JK Shin, CEO and Head of IT & Mobile Communication at Samsung Electronics.

The tablet comes pre-loaded with kid’s apps and brand new Kid’s Store. Pre-loaded content includes educational, games, entertainment and e-book apps. The tablet also offers parents the ability to select the apps they want their kids to have access to using the Application Manager.

In addition, Tab 3 Kids includes a Time Management feature that allows parents to set specific time periods for use. When the designated use time is up, a password protected lock screen appears, requiring a parent or adult to enter the password to unlock the device.

According to a press release by the company, Samsung Galaxy Tab 3 Kids will be available in Korea in early September and subsequently available across China, Europe, U.S., Africa, South America and South East Asia.

There is no word on pricing but given the specs we don’t expect it to cost too much.