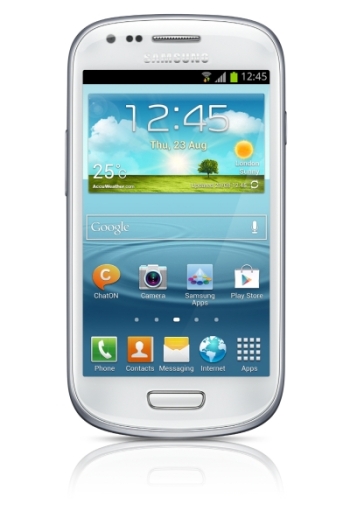 Samsung UK has just announced the availability of Galaxy S III Mini smartphone in the country. The phone will go on sale starting November 8 in UK. S III Mini will come pre-loaded with EA’s two games – The Sims 3 and Bejewelled 2.

The smartphones, which was originally launched three weeks ago, comes with a 4-inch Super AMOLED display with 800x480p resolution, 1GHz dual-core processor, and 5MP rear camera with LED flash.  It also features 1GB of RAM, 8/16GB of internal storage, and 1500 mAh battery.

“Our latest addition to the Galaxy portfolio, the Galaxy S III Mini brings the high performance, intuitive ease-of-use and nature-inspired design of the Galaxy S III in a new elegant yet compact form. Following the massive success and popularity of the Galaxy S III and all its features, we are confident customers will enjoy the Galaxy SIII Mini when it hits the shelves on the 8th November,” said Simon Stanford, Vice President, Telecommunications & Networks, Samsung UK and Ireland.

According to the company, Samsung Galaxy S III Mini will be available to buy in the UK across all major networks, key high street and out of town electrical retailers and online retailers from 8th November.