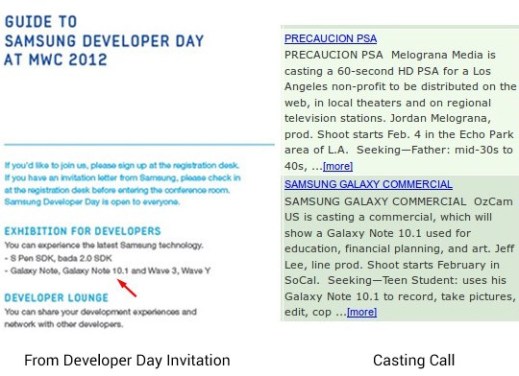 Samsung’s official blog has revealed the upcoming 10 inch tablet avatar of Galaxy Note in a developer day invitation, which will be happening at Mobile World Congress. This dev-day will focus on S-Pen SDK and Bada OS, thus removing the possibility of the name being a typo for Samsung Galaxy Tab 10.1 as it does not support S-Pen.

Company has also removed the blog post following the leak, cementing the existence of Note 10.1 even more. The Verge, which first spotted this leak, has also found a casting call for a Samsung commercial, which also mentions Galaxy Note 10.1.

Looks like Samsung is bringing the S-Pen support to company’s 10 inch tablet successor and thus the use of Note moniker. As the invitation states that tablet will on display at MWC, we are expecting an announcement prior or at the event.