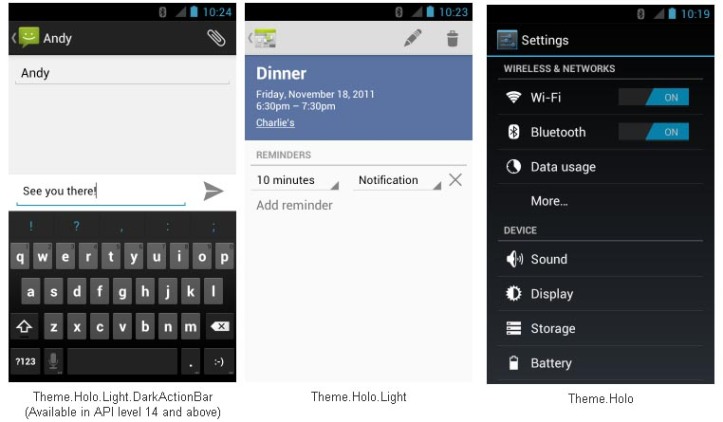 Let me start off by saying that it is not really much of a deal as some of our fellow tech blogs have been reporting. The decision to make the inclusion of unmodified Holo theme family a compatibility requirement for devices running Android 4.0 and forward, is more of importance to app developers than anyone else. They can now spend more time on their app designs and less time on worrying about how those apps will look on one device or another.

Google today announced via Android Developers blog that from now on, if a device has Android Market, it will have to keep the Holo themes as they were originally designed. Meaning, if an App developer wants to stick to the stock Holo look even on a skinned (read HTC Sense, Touchwiz) device, he will have the necessary files on the device and will just need to call them via code.

This will help devs in keeping a consistent design across the Android devices, but this in no way forces manufacturers to do anything apart from keeping the theme framework on their devices. They can as usual put skins atop Android and ruin the experience.

For devices running on older version, devs can use Android’s resource system and define themes for their apps that are selected automatically based on the platform version of the device it’s running on.

If you want the dirty details, head over to Android Developers Blog.